Perhaps the most remarkable lesson from last month’s raid on Mar-a-Lago was the velocity at which Republicans rallied back around Donald Trump. Over the previous several months, after all, Trump’s standing among the G.O.P. establishment had been weakened by a series of exhausting revelations concerning January 6 and the rise of less baggage-laden ‘24 alternatives, most notably Florida Governor Ron DeSantis. Just as the media spotlight was beginning to lock onto Tallahassee, however, the F.B.I. descended on Palm Beach. The former president’s allies were practically jubilant. “Never let a crisis go to waste,” a source close to Trump told me at the time, previewing the Fukushima-level Fox News meltdown to come. “I think this basically makes it impossible for a DeSantis [run] now,” another Trumpworld advisor suggested.

Since then, of course, Trump’s martyr narrative has become more complicated. As it turns out, Trump did have confidential and top secret records stored improperly at his South Florida resort—in desks, in the basement, stuffed into bankers boxes—just as the Justice Department claimed. At least one of them appears to have pertained to a foreign government’s nuclear capabilities. Trump’s attempts to stymie the investigation with the appointment of a “special master” backfired miserably, after his legal team refused to pony up any documents proving that the documents had been declassified, as he belatedly claimed. A Politico-Morning Consult poll released this morning found that Trump’s popularity declined by five points among Republicans over the past month, from 57 to 52 percent—a sign that, perhaps, the F.B.I. raid was not the permanently galvanizing event that Trumpworld had hoped.

DeSantis, meanwhile, hatched plans for a high-octane, attention-grabbing, lib-triggering political stunt straight from the brainpan of Tucker Carlson: rounding up Venezuelan migrants, packing them onto charter flights, and dumping them, unannounced, on Martha’s Vineyard. The resulting outcry was, presumably, exactly what DeSantis had intended when the operation was conducted last week: Left-leaning institutions from MSNBC to the Times editorial board were outraged, while the right-wing media ecosystem erupted in applause. DeSantis wasn’t the first Republican governor to conceive of shipping undocumented immigrants to so-called sanctuary cities, but his cruel twist on the gimmick—transporting the border crisis over 3,000 miles to an offshore, liberal enclave—was a genuine innovation in the culture wars.

Is the “DeSantasy” back on? DeSantis himself is certainly enjoying his moment, basking in near-universal praise from the hinterlands of Infowars to Fox & Friends, Hannity and Carlson, from American Greatness and the far-right Claremont Institute to the ur-establishmentarian Mitch McConnell. And Trump is reportedly fuming over all the attention DeSantis has received. A recent USA Today/Suffolk poll, conducted shortly after the migrant flights, found that the Florida governor now leads Trump in a hypothetical primary matchup in the Sunshine State by a whopping 48 to 40 points—a massive reversal from the last time pollsters asked that question, back in January. DeSantis, of course, has the added benefit of being the state’s governor, but it’s a show of strength regardless: I’ve been told that the DeSantis team wants to exceed Trump’s 2020 margin of victory when the governor faces reelection this fall.

If there’s a risk that such a flagrant stunt will turn off independents, the DeSantis team seems unconcerned. A Republican strategist pointed me towards a recent New York Times/Siena poll that showed Democrats underwater in every question related to immigration. “The border [has been] Biden’s worst issue in every poll for months,” this strategist explained. “It’s a crisis on multiple levels and independents tend to be very right wing on most immigration issues.” Indeed, a recent NPR poll also showed that a majority of independents viewed the border crisis as an “invasion,” and an NBC poll from earlier this month found that 56 percent of voters disapproved of Biden’s handling of immigration.

“Not sure if it will move any voters, but it certainly proves the hypocrisy of the left,” a second Republican operative told me. “It was a fun media cycle but already dead,” he continued, brushing off the possibility that civil rights lawsuits would damage DeSantis, especially in the long run. “No one cares or will pay attention to that part. Except politicos.”

Digital World Acquisition Corp, the SPAC that had planned to merge with Trump Media and Technology Group, is still struggling to close the deal. While the company’s first (and so far only) app, Truth Social, appears to be enjoying some limited success, its parent company is under S.E.C. investigation and has yet to accumulate the shareholder votes it needs to extend the deadline to complete the transaction. It hasn’t helped matters that DWAC apparently can’t afford to pay the proxy soliciting firm that was supposed to whip up the votes. Meanwhile, DWAC is also in danger of losing its promised billion-dollar PIPE financing, which was contingent on the merger and has since reached a potential expiration date. C.E.O. Patrick Orlando is reportedly renegotiating with these investors, who want to reduce their risk, boost their potential profit, and dilute Trump and other investors’ shares.

Has it all become more trouble than it’s worth? TMTG could still move to call off the merger—either keeping the company private or seeking out a new SPAC. But Truth Social has little revenue, despite a recent deal to join Rumble’s advertising platform, and has reportedly struggled to pay vendors. There’s also its broader reputational problem within right-wing media. Over the past several months, I’ve spoken to numerous digital comms folks from campaigns, think tanks, and strategy firms, and I can’t find a single person who believes that Truth Social is the be-all, end-all of pro-MAGA social media platforms. Sure, it’s Trump’s exclusive social-media home (for now), but without the massive cash injection that DWAC had promised, its financial position is weakening fast.

Meanwhile, Truth Social’s rivals aren’t slowing down. Parler, the original pro-MAGA platform, just closed a $16 million Series B round. GETTR, the platform founded by former Trump staffer Jason Miller, has more users (6 million) than Trump has followers (3.9 million). And then there’s Gab, the fringey social platform that is popular among white nationalists, but which has perhaps the most robust digital infrastructure of any of its competitors. “It’s like the right-wing platform primaries,” a consultant for one of these platforms told me. “Each one does one thing great. But nobody has been able to put it all together.”

Ever since Trump’s Ohio rally last weekend, which culminated in a bizarrely culty call to some sort of MAGA prayer, I’ve been bombarded with variations of the same questions: Was that weird song a QAnon thing? What about attendees pointing their fingers in the air? To which I responded: Does it have to be? One of the superpowers of the QAnon movement, as I’ve written in the past, is that it doesn’t require politicians to demonstrate overt support for them to benefit from the cause, nor does it rely on established patterns. Sometimes, a wink is enough.

QAnon adherents, after all, are united by a shared obsession with cryptic signs: the number of flags behind Trump at a rally, the symbology of a pizza restaurant where the Clintons held a fundraiser, the mere mention of the word “storm.” And it doesn’t take much effort for figures like Trump to win their love: all it has taken is him retweeting certain accounts (or, in the year 2022, re-Truthing), or saying the right phrase inadvertently, or even drawing a circle with his finger mid-air. For what it’s worth, the majority of extremist researchers who’ve followed QAnon noted at the time that they’d never seen the finger-pointing thing before, but as Mike Rothschild, author of Into the Storm, predicted, it will inevitably become a new sign of membership. “Whatever this is, they’ve decided whatever this is.”

If Trump was winking at QAnon deliberately, which certainly seems to be the case, then it marks a significant departure from his past M.O. Up until 2021, the Trump campaign made a point of barring people bearing QAnon-related slogans or iconography from attending rallies, and even after January 6th, people around Trump told me that they were deliberately trying to keep the conspiracy away from Trump. That effort, it appears, has collapsed. “It means there are no real advisors left,” a person familiar with the campaign infrastructure told me after the rally. As for why Trump is leaning into Q-lite? “He’s searching for his base and having a hard time finding a path to speak to them,” this person suggested.

Leave It to Tapper 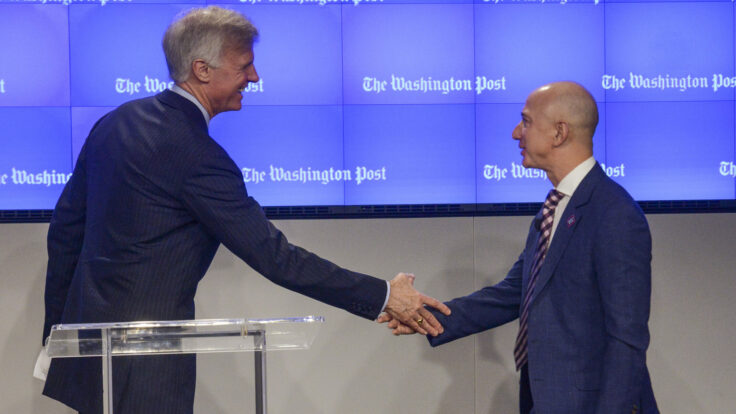