As my colleague Peter Hamby has wisely noted, the clock of political coverage in Washington seems to reset every Monday morning, with a new narrative quickly taking shape as if the past week—or century—hadn’t happened. It’s part of the problem with how this town is covered, with so much of political media driven by a play-by-play mentality. Detractors call it “horse-race coverage,” but, in my humble opinion, it is not about horses or racing them. It is, rather, part of this town’s obsession with sports, especially baseball.

So, what are we obsessed with this week? The debt ceiling has been raised—albeit temporarily. The Hill, it seems, can only get things done when they’re speeding headlong toward a cliff, as veteran Congressional reporter Carl Hulse recently pointed out. As someone who can only get things done when there’s a looming and terrifying deadline approaching, it’s something I’ve been thinking about for weeks: Congresspeople, they’re just like us! Ultimately, this is a town like any other, and, to me, there’s something remarkably similar about my conversations with friends on the Hill and friends who are lawyers or financiers in New York. It’s hard to put big deals together, and moving pieces will keep moving till the last possible minute. The principals will be maneuvering and strategizing, while the staffers or associates have to implement the detailed and legalistic product of their negotiations. And everyone involved will see only their workplaces and very little sleep till it’s all done and signed. The only difference between how a corporate M&A deal goes down and the current negotiations in Washington is that what people on the Hill are currently working on—the bipartisan infrastructure bill and Biden’s Build Back Better plan—will tangibly change the lives of every person living in the United States.

One of the things that’s been hard to find among the play-by-play coverage is what these bills, especially the Build Back Better legislation, would actually do. In part, this is because the topline number—i.e., how much Congress agrees to actually spend on Biden’s agenda—keeps changing, and that, in turn, means we still don’t know which programs will make the final cut. For reference, here are some stories that talk not about the legislative strategy to get the bill over the finish line, but what they will (may?) accomplish.

Still, the drawn-out negotiations on the Hill and the way we in the media cover them have consequences. A poll out yesterday shows that a majority of Americans don’t really know what’s in the bill, and most of what they know is how much it would cost, not what’s actually in it. Proposals like reducing prescription drug costs and including dental coverage in Medicare are the ones people know the least about. According to the poll, only a third of Americans—and just 61 percent of Democrats—think it would help them directly.

That’s not very good for Biden, but it also proves one of the cliches of American politics: Republicans are better at messaging than Democrats. Cliches become cliches for a reason, and there’s a lot of truth behind this one, too. While Republicans offer zero support for this bill and watch contentedly as Democrats haggle in public, most of what we hear about are the negotiations. And what are the negotiations about, thanks to conservative Democrats Joe Manchin and Kyrsten Sinema? The topline number: $3.5 trillion. Even though it’s only going to get smaller—thanks again to Manchin and Sinema, whom this town has come to call, in cringeworthy fashion, Manchema—the number is big and very easy to remember.

This makes Republicans’ job much easier. They can just resort to saying, yet again, Democrats want to raise the debt ceiling and your taxes, and spend your hard-earned money. Democrats, on the other hand, have to explain how this elaborate yet not-fully-written bill will make life measurably better for you. It’s a lot of policy detail, and policy details make people’s eyes glaze over—including the eyes of most reporters. It’s hard to tell a good policy story, and harder still to tell one about a policy that doesn’t yet exist. It’s much easier to cover the back and forth of the negotiations of who wants what number.

Of course, Democrats love to browbeat the media for not doing their work for them, in this case messaging their legislative priorities properly. There’s an assumption, as one White House reporter told me over the summer, that we journalists are natural allies and that, as sane, rational human beings who can see and read, we will cover Democrats not just favorably, but as if they are right. But Democrats’ time would be better spent improving their own messaging than protesting when the press fails to cast their policies in the best possible light. Late last week, Renuka Rayasam of Politico, tried to show Democrats how it’s done by asking ad makers and consultants how they would message and sell the Build Back Better bill to Americans. Literally anything in that resulting collection of ideas would be better than what the White House has managed thus far. And no, complaining about the media does not count as an effective messaging strategy. As Biden himself said this summer, the buck stops with him.

Everyone in Washington is talking about two things.

First, they’re talking about the Virginia governor’s race. In part, it’s because so many people in #thistown actually live across the river, in Virginia, where the taxes are lower and the houses are huger. It’s also because of what the race portends for the Biden agenda and the 2022 midterms.

A quick recap, if you’re not familiar. Terry McAuliffe, a long-time buddy and fundraiser for the Clintons and a former governor of Virginia, is running for governor again. He was not unpopular during his first gubernatorial stint, but, with the election just a couple of weeks away, the race is surprisingly tight. McAuliffe’s opponent, Republican Glenn Youngkin, was very successful in corporate America and is trying to fuse the faces of G.O.P. past and present into one person, a sober-seeming businessman who can also speak the language of Donald Trump.

Dems are worried. Why is the race so close in Virginia, a state that’s come to be seen as reliably blue? If Youngkin wins or if he loses in a squeaker, does this mean that Virginia is actually purple or, as McAuliffe has been saying to lower expectations, light blue? Many Democrats see this gubernatorial election as a bellwether for 2022—and even 2024. They’re wondering if someone like Youngkin, a milquetoast white man who resembles the pre-Trump G.O.P. while also being highly conversant in Trumpese, could have a good chance of winning. And if the infrastructure and Build Back Better bills don’t have enough baggage, people in D.C. are predicting that if the two, intimately tied bills fail, McAuliffe will lose an easily winnable state (he won in 2013 by 35 points) and spell doom for Democrats in races across the country, jeopardizing their control of Congress in 2022.

Second, they’re talking about Trump. (Surprise!) People keep asking: Will he run again in 2024? It’s become predictable and awkward conversational filler in these parts. The question has supplanted the Have you gotten the vaccine yet? and all the details this-towners loved to discuss: How did you manage to get it so early, how did you work the system, which vaccine did you get? (And that, of course, replaced, Oh my god, did you see what he just tweeted? For five years, it made Washington conversation flow like Rock Creek after a heavy rain.) Now we’re back to Trump. Will he or won’t he?

It reminds me of the conversations I had in Moscow through all of 2011 as the country’s political life, such as it was, ground to a halt. All anyone could write or talk about was whether Vladimir Putin, then Russia’s prime minister, would return to the presidential throne in 2012. Will he or won’t he, will he or won’t he? The answer then was the same as it is now: we just don’t know. Or, if you want to get into the details: he probably wants to but probably hasn’t decided and won’t pull the trigger until the very last minute (our common thread, it seems). When Trump does decide, he will certainly let us know, and all our speculation and all our takes will seem dusty and pointless, as all self-congratulatory (and dare I say, masturbatory) speculation is. We’ll know when we know, and until we know, we won’t know. Why not just enjoy the largely Trump-free pause in our national discourse? Unless, of course, we actually have nothing else to talk about.

One last thing before I let you go. I can’t not mention the Nobel Peace Prize going to two journalists, including Dmitry Muratov, the longtime editor-in-chief of the independent Russian paper, Novaya Gazeta. The announcement came a day after Muratov and his staff marked the 15-year anniversary of the killing of their correspondent Anna Politkovskaya, who was gunned down in her elevator on Putin’s birthday in 2006. The 15th anniversary also marked the running out of the clock on the statue of limitations on her murder, even though the person who ordered her killing has never been found. (Some hitmen—or perhaps fall guys—are serving jail time for shooting Politkovskaya.)

The Nobel announcement also came after a nine-month stretch of an unprecedented crackdown on the independent press in Russia—unprecedented even for Putin. It had always been hard to be an independent media outlet in Putin’s Russia, but, in recent years, some seedlings had started to grow through the cracks. There was TV Rain, the only independent national television network; MediaZona, founded by Pussy Riot to cover Russia’s notoriously brutal and corrupt penal system; as well as Meduza, which publishes an excellent English-language digest of the news in Russia. But in January, after opposition leader Alexey Navalny returned to Russia from Germany, where he was recovering from being poisoned by the FSB, the Kremlin once again turned on the steamroller, crushing the seedlings back into the asphalt. These and many other independent outlets, including individual journalists, have been labeled “foreign agents.” Many have been forced to disband and close; some journalists have had to flee the country. Novaya Gazeta has been able to survive it all, including serious threats against its journalists, like Elena Milashina, who first broke the story, in 2017, that gay men in Chechnya were being hunted, tortured, and killed—or turned over to their families for honor killings. It is in part thanks to the work of Muratov, who has been able to shrewdly navigate the hostile political landscape and protect his reporters while they do their impossibly intrepid work.

And while I’m glad that the international community is again recognizing the other-worldly bravery of Russian journalists, I wish that we American journalists, swaddled in comfort and privilege, would learn a thing or two from our colleagues in Russia and the Philippines, home of Maria Ressa, who shares the prize with Muratov. These journalists risk everything to tell the truth, and they continue to do so even when they know that, like Muratov’s journalists, they could be killed for doing so, or like Ressa, face life in prison. May it never come to that here, but, as we’ve seen in the last few years, the distance between their situation and ours can shrink rapidly. Will we be as brave? 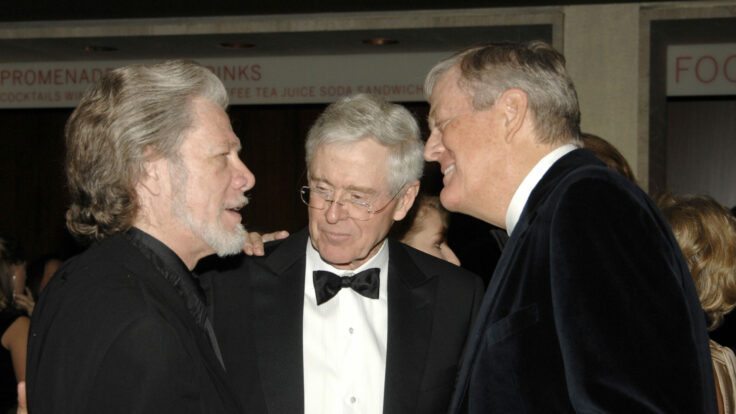 Inside the Dems’ Dark Money Machine