In Washington, political motivation is usually as transparent as the morning fog. Yes, of course, it is certainly true that many bright-eyed altruists descend upon the capital every year with a song in their heart, hoping to make a difference for the American people, slavishly devoting themselves to the bureaucratic arts in the hopes that incremental change puts food on the table and validates the Founding Fathers’ almighty ambitions. But then there’s everyone else—the people with an angle or an endgame, motivated by money or legacy, eagerly happy to climb the ladder or politely drop a banana peel in front of a peer, albeit cloaked in the name of democracy. And then there’s Joe Manchin.

Manchin remains one of the more peculiar swamp creatures of his generation—a former college quarterback, career civil servant and red state Democrat who has made gobs of cash through a scrap coal business and has somehow become the most powerful person in Washington, continually vexing Joe Biden’s agenda and publicly sending Ron Klain to the back of the classroom. In the past week alone, Manchin and Chuck Schumer (the true Ross and Rachel of the Senate) got back together after a full year of breakups and half-hearted reunions to cobble together a $740 billion reconciliation package that they wisely rebranded as the “Inflation Reduction Act of 2022,” waiving off any whiff of the transformational $3 trillion F.D.R.-inspired Build Back Better bill that Klain crafted and pushed, frankly a bit too hard.

The bill was a solid victory for Biden, but a true demonstration of Manchin’s juice. He refused to come back to the drawing board for months after the White House put out a searing statement that singled him out, viewing it as too personal, even for him, even after all his grandstanding during the legislative process. This is a man that is prone to flattery—something the White House probably should have employed a bit more gingerly rather than grabbing their rhetorical knives. That’s why they had little to no role in crafting the final product. Since then, Manchin has been taking a victory lap about inflation. It appears he was right to kill that gangbusters deal last fall, and was convinced to support this deal after a private pow wow with Larry Summers, the prescient economist and Biden administration irritant—a detail that somehow made it into The Washington Post.

Naturally, this being Washington, 2024 savants are wondering if Manchin has larger ambitions. There are, after all, a fair number of moderate Democrats in Washington who fantasize about a Manchin ticket, especially the bipartisan Super-PAC No Labels, which I’ve been writing about. They’ve done polling on what a mashup Manchin-Lisa Murkowski–Larry Hogan sorta ticket would look like. Some quixotic centrists have theorized, or at least have hoped, that Manchin would maybe consider running as a Democrat to save the country. They see his bipartisan approach, and ability to win swing states, as making him an appealing candidate in the same way that Biden was initially pitched, during the primary, as the more moderate Democrat.

But that interpretation entirely misses the character of the man. “He doesn’t think this will set him up for that,” said one former Manchin staffer, regarding a run for the presidency. “Even though we tried to get him to think like that, he’s just not that way.” His political instincts are a bit more go-with-your-gut, and they are indeed more localized. Manchin, who attended WVU on a football scholarship, ascended from state senator to secretary of state to governor to senator. He’s not pining for a leadership position or really even 1600 Pennsylvania.

Instead, Manchin is an old fashioned senator, a big personality, he loves the media and he loves being at the negotiating table. He’s also a typical big-fish-in-a-small-pond guy. He may be comfortable talking to David Rubenstein, but he also lives on a houseboat that is often incorrectly referred to as a “yacht” and really looks more like a double-wide trailer floating on one of the dingier stretches of the Potomac. On Sundays, he cooks pasta with his wife, Gayle. (He’s Italian; his name has been derived from “Mancini” to a more palatable Anglo-sounding configuration.) Like all self-assured people, he drives a used Maserati.

His political peccadillo isn’t assuming the White House, but doing his part to prevent America’s shift from the middle, a fear that he will articulate to anyone who will listen. When Manchin strikes down a deal like BBB, he’s not just doing it for his red-voting constituents of West Virginia, who fear that the stimulus will continue to overcook the economy. He’s also doing it to quietly make life easier for other centrist Democrats representing swing states, like Mark Warner in Virginia, Jon Tester in Montana, and Angus King in Maine, and oftentimes an even quieter group of moderates like Sens. Chris Coons in Delaware and Amy Klobuchar in Minnesota. Liberal Democrats detest him because he can often appear like a Mitch McConnell Manchurian candidate, but he’s not the only warrior on the center-left side; his allies are all just too terrified of The Squad to speak up themselves, and that’s something Manchin is willing to do because it only helps him at home.

When liberal activists were on kayaks protesting outside of Manchin’s houseboat, Democrats in Washington quietly whispered that 2024, when his Senate term is up, was a long way away—the typical lets-primary-the guy parking lot talk of the town. But it’s hard to imagine that having any influence on Manchin’s thinking. He doesn’t really love the Senate, I have been told, but he has a 57 percent approval rating in West Virginia, and he’s acutely aware that pissing off liberal Democrats is the best form of job security imaginable for a seat that would otherwise be handed to a Republican in a likely landslide. No amount of Kamala Harris appearances on local West Virginia chat shows will change that. In fact, throughout his career Manchin has long flirted with running for governor of West Virginia again—his favorite gig so far. And it may be his last act as a politician, if he doesn’t retire in the Senate or choose to sit himself on a plethora of boards and rake in even more cash.

“He often tells people that being governor was the best job in the world,”  said a source close to Manchin. “And he jokes that Mark Warner lied to him about the Senate when he told him to run for [Robert] Byrd’s seat.”

On Saturday night, just after Donald Trump had walked off the stage following his once-provocative, now-familiar stump speech at the Turning Point USA conference in Tampa, Kimberly Guilfoyle made a beeline for the 45th president and her future father-in-law. In five-inch platinum pink patent leather stilettos and a bright blue sheath dress, this veritable MAGA Barbie had the intention of hand-delivering a letter to the visibly exhausted Trump, who had just given a 90-minute speech.

One person called it “unbelievable.” But Trump engaged with her nevertheless because his son, Donald Trump Jr., was standing nearby, along with Marjorie Taylor Greene, Matt Gaetz, Charlie Kirk and Lauren Boebert, who were all eager to chat backstage with Trump about his rivals. Guilfoyle, who now doubles as the national chairperson for Eric Greitens, burst into a pitch about the other man in her life: the alleged domestic abuser running for the U.S. Senate in Missouri.

Greitens, who was once polling above the pack of candidates in the G.O.P. primary, has recently nose-dived in advance of next Tuesday’s election. Outside groups have spent $6 million to pummel him with attack ads reading out the exact allegations of abuse that his wife and son have made against him. Now, many polls show him in third place, behind Vicky Hartzler, who shot to the top of the pack after receiving an endorsement from Josh Hawley, only to be singed when Trump withdrew his endorsement after claiming she was insufficiently MAGA. The current frontrunner, Eric Schmitt, is a relative newcomer to Trumpworld. Schmitt and Trump spoke on the sidelines of the America First Policy Institute summit event on Tuesday in D.C., where Schmitt also handed him a memo showing how he was leading in the polls and that he would only surge with the Trump endorsement.

According to people familiar with the situation, Trump has been frustrated by Guilfoyle’s connection to Greitens. Not only does he apparently find the guy to be a creep, but he also hates when people monetize their connections to himself, as Guilfoyle ostensibly has in this situation. But he nevertheless took her letter laying out how all the accusations against Greitens, including that he tied up his mistress in his basement, are B.S. According to someone familiar with the situation, the note also laid out all the ways in which Greitens can win, and all the ways in which he is the real MAGA candidate.

Trump, for his part, still has not made up his mind over whether he will endorse anyone in the race, as he’s being pushed and pulled in so many different directions with loyalists on both sides. Greitens’ people are arguing that Mitch McConnell wants Schmitt to win, and would have extreme heartburn if Greitens was victorious instead. The last part is accurate, and it’s appealing to Trump. They also claim that if Trump endorsed Greitens he could turn it around.

Although it’s true that Trump has been known to endorse candidates at the very last minute, including candidates who are down, it would seem very hard for Greitens to cut new ads and get the airtime before next Tuesday. Meanwhile, every day the election gets closer, voters’ thinking becomes firmer. Some people close to Trump suspect that, in the end, he won’t weigh in at all in the Missouri race, since he’s being flooded with contrary polling and messages. Trump also knows that if he doesn’t weigh in, Schmitt will win. And that if he endorses him at the end of the race it can only pad Trump’s score card. 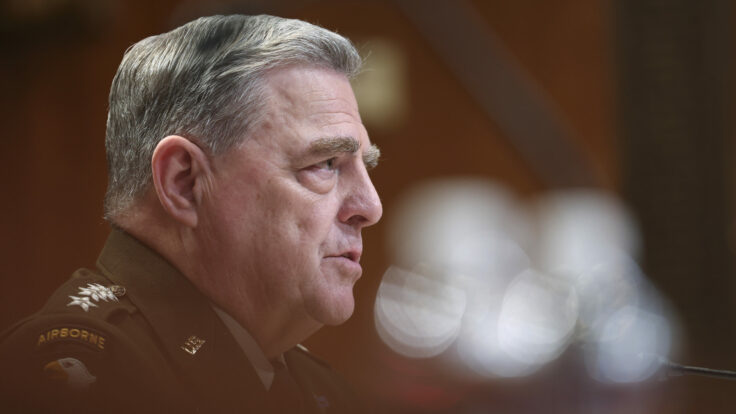 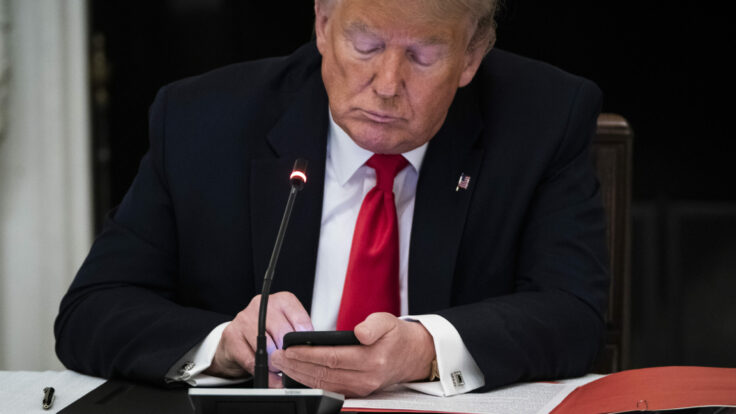 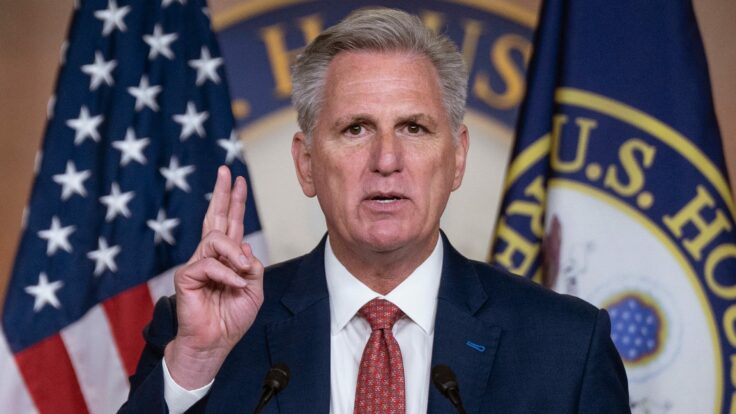