It appears I’ve returned from my mini book leave just in time. Depending on which political team you’re on—and politics is a team sport more than ever these days—today really is worse than yesterday. Democrat Terry McAuliffe lost the race for governor of Virginia (a job he’s had once before) to Republican Glenn Youngkin. Republicans are also on track to flip Virginia’s House of Delegates, and won the races for lieutenant governor and attorney general. The governor’s race in New Jersey is, as of this writing, too close to call, with Democrat Phil Murphy leading by a whisper. But the fact that it’s this much of a squeaker isn’t great news for Democrats as they get ready for 2022 midterms, when the party in power traditionally gets walloped.

It’s the day after an important Election Day and everyone has some exceedingly strong opinions. Twitter seems to be an even angrier place than usual today. But since you’re here, I’m going to assume that you’re electing to hear my opinions, so here are some thoughts. And because Virginia is just across the river from Washington, D.C. and is where many of the swampiest swamp creatures live, it’s all we Washingtonians really care about today. So apologies to all my New Jersey readers. I got nothin’.

Culture wars work. That is my first and biggest takeaway from yesterday’s election.

For the last leg of the campaign, Youngkin vigorously incorporated the topic that’s been conservative media’s culture war du jour: critical race theory. This old, established, and uncontroversial academic concept posits, essentially, that it doesn’t so much matter whether an individual is actively racist or not because the structures of American society were built on racist foundations and continue to function in that way.

Critical race theory is not taught in K-12 schools, but Youngkin pledged to ban it anyway on his first day as governor. (Interesting that the academic freedom folks—a generally conservative bunch—are cheering this promise. But I digress…) Fox News and conservative culture warriors have turned the concept on its head and have been telling parents that C.R.T. (their abbreviation) is being taught in schools, where white children are segregated by race and told that they are racist oppressors.

This is not what critical race theory is, but it didn’t matter, because angry white parents, usually moms, showed up at school board meetings spitting fire about C.R.T. Youngkin, the former co-C.E.O. of the Carlyle Group, a private equity giant, cut a race-baiting ad with a white woman saying that she was shocked about the “explicit” material her son was reading in school. She was horrified that she wasn’t allowed to keep him from reading it for class, and only Youngkin understood her struggles. Turned out, this woman was a Republican activist, that her son grew up to intern at the Trump White House, and that the explicit reading material she was trying to ban was Beloved, Toni Morrison’s award-winning novel about a woman trying to outrun slave catchers and the trauma of her enslavement. For his part, McAuliffe just fanned the flames by saying that he didn’t think parents should be involved in shaping school curricula.

And guess what? It worked. Suddenly, education shot up as a priority among Virginia voters, second only to the economy. For an off-off-year election, there was massive turnout yesterday—and three-quarters of the people who came out were white people. Fifty-one percent of yesterday’s voters were people who felt that parents should have “a lot” of say over what gets taught to their children in schools, and three-quarters of them went for Youngkin. White suburban women (many of them moms, presumably), that elusive electoral group that helped both Trump and Joe Biden secure the White House, swung definitively for Youngkin by eight points. Three-quarters of white women “with some college education or less” voted for Youngkin, a 19-point shift from 2020. Parents of under-18 kids went for Youngkin, too, a seven-point increase from the 2020 election, when the majority of them had voted for Biden. (Click here if you want to see more interesting exit-poll stats.)

I’m not the only one who thinks that the manufactured issue over critical race theory is what won Youngkin the governor’s chair: the Republican party does, too. By Wednesday morning, the Republican Study Committee put out a memo that said that, in future elections, “Republicans can and must become the party of parents” and fight “racist C.R.T. curricula.” They suggest campaigning on the promise that “federal funds are not being used to separate students based on their skin color or assigning assumptions or characteristics of students based on their skin color.” (Read the memo. It’s wild.)

The fact that no one is teaching critical race theory to children—and no one is proposing separating students by race—is entirely beside the point. As is the ongoing pandemic, growing inequality, our insane healthcare system, etc. The point is that, as an electoral strategy, rage works—even if it’s aimed at a windmill. Some Democrats contend that if the bipartisan infrastructure bill had passed before the election, it would have helped McAuliffe, but I disagree. It’s a lot harder to find a clear, consistent message around a complicated policy than it is to be angry about something. And Republicans are masters of this tactic.

I keep thinking back to 2004, when, in the middle of two foreign wars quickly going sideways, George W. Bush ran for reelection on… banning gay marriage. And it worked. People got so riled about gay people ruining their hetero-marriages, that Bush got a second term to continue wiretapping and bankrupting the U.S.

Democrats have learned this lesson, too: rage against Donald Trump drove Democrats to the polls in record numbers in 2018 and 2020. (It’s worth noting that, in 2020, the Republicans lost the election but got massive turnout and Trump got 11 million more votes than he did in 2016. In the middle of a pandemic that, at that point, had killed half a million Americans, they were getting their base angry that the U.S. was about to turn into the U.S.S.R. and that “law and order” was being overturned—which is ultimately code for the same thing as C.R.T.)

In sum, anger works. Racist dog whistles work. And it’s why our country looks the way it does today.

You can tell a lot about the two parties by how they lose. After getting clobbered by voters on Tuesday, Democrats turned to clobbering each other on Wednesday. Moderate Democrats blamed progressive Democrats for not passing the bipartisan infrastructure bill, thereby depriving McAuliffe of something tangible to run on. Progressive Democrats pointed out that McAuliffe is a moderate and blamed conservative Democrats, like Arizona Senator Kyrsten Sinema and West Virginia’s Joe Manchin, for holding up and eviscerating programs like paid family leave and lower prescription drug prices, which, they argue, are wildly and broadly popular. Some, like Virginia Senator Tim Kaine, blamed all Congressional Democrats—left, right, and center—for what he called “purist demands” and being unwilling to compromise on their exact vision of the thing.

What do Republicans do? They double down, or they blame someone else. In 2012, when Mitt Romney lost to Barack Obama, Republicans compiled their fabled election autopsy report, which said that they needed to do more outreach to minority voters. But just a few months after it was written, the autopsy itself was dead. The G.O.P. decided the problem was that they weren’t conservative enough. In 2020, when Trump lost, he blamed the referee. (There’s a much more colorful Russian expression for this, but I’ll spare you.) It wasn’t that Americans had roundly rejected him, Trump said, it was that the election had been rigged and stolen. Trump repeated that lie over and over, and now the vast majority of the Republican Party believe it—or at least publicly parrot it.

When they lose, Democrats turn inward for soul searching and a circular, intra-party firing squad. Republicans blame anyone but themselves and turn their energy outward and focus on going harder.

Trumpism without Trump seems to be a winning strategy for Republicans. Youngkin made sure of two things: that Trump didn’t appear with him on the campaign trail—and that there was no political daylight between the two of them. Trump endorsed Youngkin, but there were no crazy Trump rallies in Loudoun County or anywhere in this state that Biden won by 10 points in 2020. (There was a Trump telephone rally in the final days before the election, but that hardly counts.)

Still, Youngkin ran on a modern Republican agenda, which, these days, is the Trump agenda: no vaccine or mask mandates, backing the police, lower taxes, and culture war red meat so rare, it moos. And it worked. The suburbanites who had abandoned Trump as too polarizing and wild in 2020 voted for Youngkin in 2021. As I mentioned above, 49 percent of white women in Virginia voted for Trump, but 57 percent went for Youngkin just one year later. Heck, as many Republicans are gleefully pointing out today, Youngkin even got some Black women to vote for him, a six-point increase in the number that voted for Trump in 2020.

As many people have pointed out, if Republicans were wondering how to run with Trump but without him, Youngkin provides one answer, especially in states like Virginia, which have leaned Democratic in the last decade. There is always Ron DeSantis mimicking Trump down to the hand gestures in Florida, but now he’s not the only model for how to win on a Trumpist agenda in the post-Trump era. 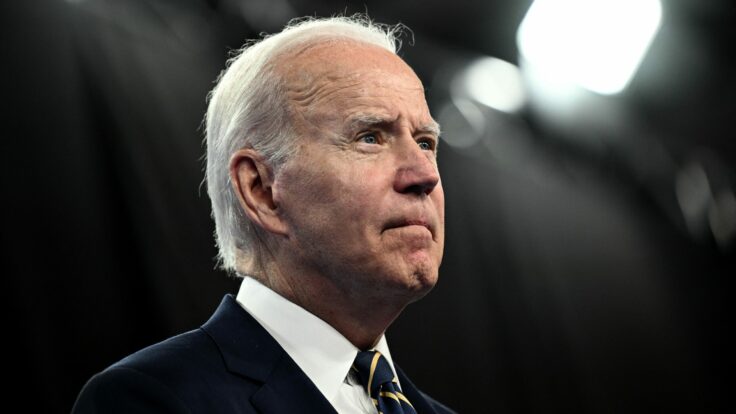 Europe Braces for Life After Biden 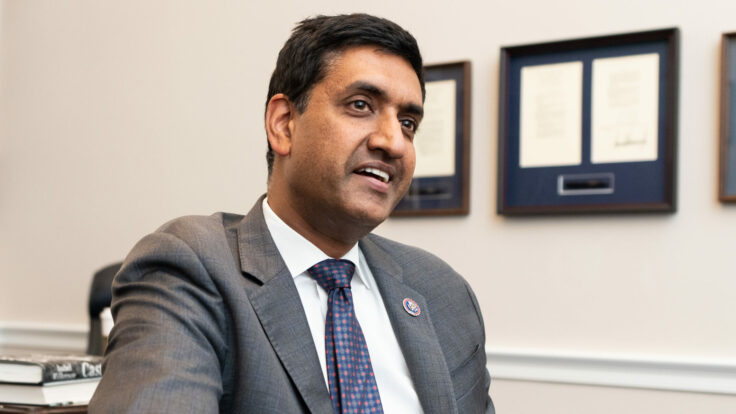 Ro Khanna Psychoanalyzes His Own Party 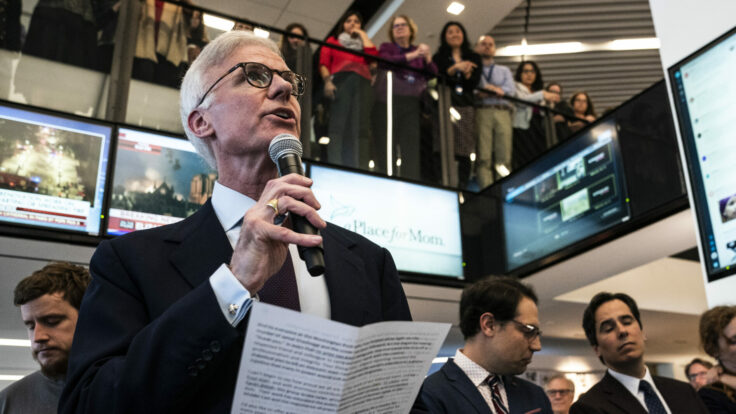