Every time a big Netflix executive leaves these days—and it’s happening a lot thanks to the Great Netflix Correction—everyone in Hollywood seems to place it in some Larger Narrative. That’s dangerous, but let’s dive into the plight of Tendo Nagenda, the Netflix VP of original film who was lured with much fanfare from Disney four years ago by co-C.E.O. Ted Sarandos. Nagenda announced this week that he’s exiting the company amid a restructure.

Why is Tendo out? With film chief Scott Stuber’s future plans the subject of industry chatter, and analysts openly questioning the hit rate and nine-figure spending on direct-to-streaming movies, some have suggested that Nagenda might be the fall guy for Netflix’s spotty output. There’s probably some of that, and he and Stuber are said to have been especially vocal about wanting marketing campaigns for individual titles and putting some in theaters exclusively, which Reed Hastings and Sarandos may have ultimately found frustrating. But the full story, based on my conversations with insiders, is more complicated. (Nagenda and Netflix declined to comment.)

Back in 2018, Sarandos’s pitch to Nagenda was the promise of building out a spare-no-expense team to focus only on making great studio-style movies, and running it with autonomy—the Netflix culture, as Hastings has articulated from the beginning. Sounds great, right? At the time, Nagenda and Stuber were the only senior people in the group, so they had a huge impact.

We can argue about the quality of the Netflix films, and whether it’s even possible to make great movies when the bosses are demanding so many of them. Nagenda’s team delivered hits, as Netflix defines them (The Gray Man, The Old Guard), misses (The Harder They Fall, Spiderhead, and a lot of titles I’d never heard of), and many in between. He also oversaw this fall’s Knives Out sequel, for which Nagenda convinced Sarandos to ignore naysayers at the company and outbid Lionsgate, Apple and others with a massive $450 million offer for two sequels. Fun fact: Netflix now desperately wants to license the original Knives Out to stream in the U.S. when the sequel drops in December, but Lionsgate C.E.O. Jon Feltheimer, still stung by losing the franchise, isn’t exactly being helpful in making that happen. Talks are ongoing. (Lionsgate declined to comment.)

For Nagenda, Netflix offered the creative freedom and top-of-market salary that Hastings extols. It wasn’t total autonomy—Stuber is the film boss, and Nagenda really wanted to lure Jordan Peele in 2019, but the Sarandos-approved offer wasn’t enough to prevent Universal from locking in Peele for five years. (Theatrical releases matter to Peele, as well.) But Nagenda had a pretty good set-up, making a dozen or so movies a year for a global audience.

Then, about a year ago, driven by the rocket-ship subscriber growth during the pandemic, Sarandos decided he wanted more movies. To accomplish that, he and Stuber split the “commercial” group into two units, increasing the conveyor belt of output. Let’s be Warner Bros. and Universal, Sarandos essentially told people. So last summer, he and Stuber promoted Kira Goldberg and Ori Marmur to run one side, Nagenda kept his side, and together the “studio” group, as it’s referenced internally, planned to go to about 30 movies a year, most at $50 million and up budgets. Super ambitious. Then, a few months later, the Great Netflix Correction.

Yikes. With Wall Street now focusing Netflix more on revenue and profit, it became clear that the re-org had to be re-re-orged. For the next few years, it’s gonna be like 15 to 20 movies a year for the studio group, plus a few mid-budget adult titles from a team run by Niija Kuykendall. Less volume, more quality (they hope), and more impact. And Stuber will manage it all.

If you’re Nagenda, you’re no longer autonomous. And you’re looking at all the big film suppliers that Netflix has: Shawn Levy, Greg Berlanti, Sony, Amblin, Peter Chernin, Adam Sandler, Kevin Hart. That’s a pipeline. Sequels to Extraction and Enola Holmes are also happening. And you’re asking, what, exactly, will I get made here? It’s like driving on a crowded freeway and the four lanes are reduced to two or three.

Such is the plight of the modern film executive—even at Netflix. So a couple months ago, Nagenda and Stuber started talking about the options. Stuber offered a production deal, I’m told, which Netflix doesn’t usually do for execs. And Nagenda has entrepreneurial aspirations after years in the studio and streamer world. So he’s leaving, another top Netflix executive out the door, and we can draw a direct line back to the promises made by the Hastings culture, a culture that, in some ways, now conflicts with the new realities of the Netflix business. 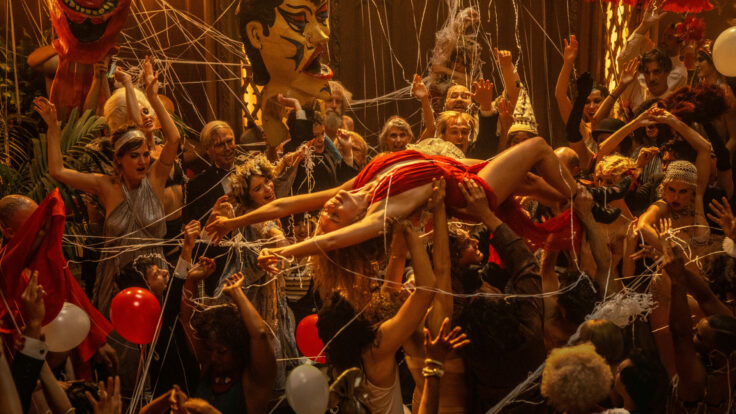